While Grandma sat with Marnie and Taylor, Grandpa was busy helping with the International Folk Dance and Music Festival entry in the 4th of July Parade. He helped carry the banner advertising the event which takes place the end of July. As a former BYU International Folk Dancer, Grandpa has had a great deal of interest in this Festival. Last year he helped as a Volunteer Usher, and this year he is on the Executive Board in charge of the locker rooms for all of the 12 countries that will be represented. It was a very warm day, and fortunately the wind came up and helped keep things cooler than expected. The only bad part, is that is was much more difficult to carry the banner, because it acted like a sail in the wind. Grandpa and his partner, Kirstin, spend most of the tame pulling the banner through the wind. 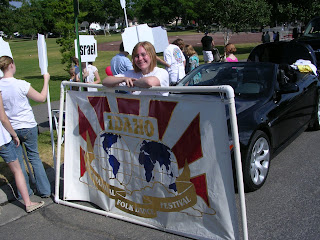 The other two pictures deal with the float that was in front of Grandpa. It was done by the Paul Mitchell Hair Academy, where grandma gets her hair cut. The theme this year was about freedom, and you can see the float had people depicting things relating to our freedom, i.e. the Statue of Liberty, Lincoln, etc. The other picture is of the young lady dressed up as the Bald Eagle. She actually sat in a nest on the float, and that is why she is not made up like a bird from the waist down. They really put a lot of work into that float! 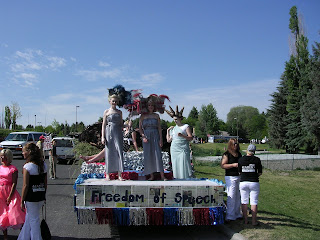 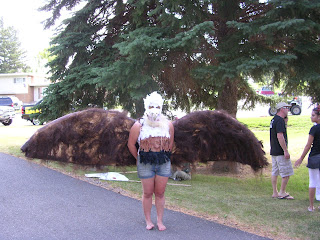 There was a great turnout for the parade, and everyone seemed to enjoy it. Grandpa's back was hurting (it actually was hurting before the parade, so he wore his back brace), so he was sore when he got home.

We hope you all had a great 4th of July, and like us, took time to appreciate all the wonderful freedoms we have in this goodly land. We love you all very much.

Grandma and Grandpa Boivie
Posted by Rich at 4:40 PM